Welcome to the Trail's first vlog from our 2014 contributors! Do yourself a favor and take a few minutes to be encouraged through this bearded friend! James, in his heart of gold fashion, challenges us to consider, no matter who we are, to spend the faith we have.

Friends, even in the impossible, we can trust God!

For those who haven't been around here before, the folks at Whisper Mountain (and some awesome people walking Along the Trail with us) offer short video encouragements meant to spur you on in your own walk with Jesus! We all can use a little spurring on, right? The Trail Mix videos run about once a month, unless it's summer camp season; then you're lucky to hear from us at all as we run dog tired Proclaiming Jesus to a bunch of teenagers! Just wanted to fill you in!

I must admit, I was expecting to be flying in cars by now. Anyone else with that childhood thought? Obviously things don't happen like we hope, but life does happen. Boy does it! My turn came on the Trail Mix so today I'm sharing a little encouragement as we remain on the front-end of 2014! (from insecurity–it's out of focus and I was interrupted a bunch of times! so see Jesus!)

Even as life happens, may we be found pursuing Jesus!

Marty is here with us today to share a super quick word of encouragement and gratitude with you as we begin this week of Thanksgiving celebrations!

Ever feel like you are running around, excited to do good things for Jesus?! Sometimes it's easy to mis-prioritize our energies! I love how Ramsey brings this to our attention in this episode of Trail Mix! Check it out (less than 2 min!).

Make the time to run to Him before running around for Him!

(don't you love the picture YouTube used for the video front? Preach it Rev. Renaldo!)

Phew! We made it! With a little perseverance and heaps of grace we pushed through! (If you've no idea what I'm talking about, read the backstory to this video!)

Have you been overwhelmed by the darkness of our world or filled with fear about something else? I'd encourage you to listen to Marty today! Less than two minutes could change perspective and offer hope!

Walk in His truth and hope today! Blessings, friends! 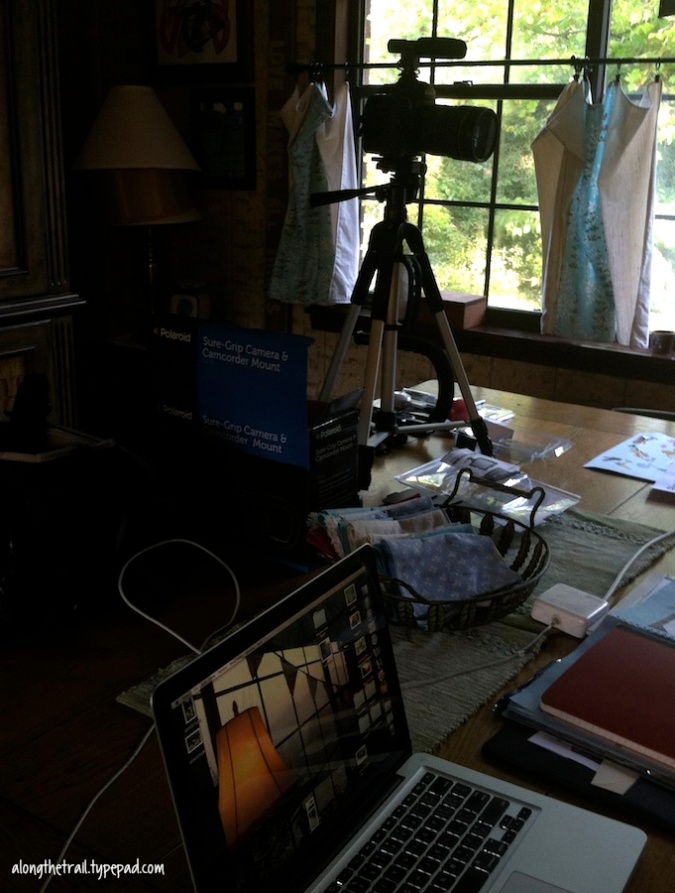 He drove over to my home studio (aka: my backyard!!) to record tomorrow's scheduled Trail Mix Episode. Being the kind of guy who has sweat glands unleash a river on his brow when in front of a camera, he was just ready to have it done. We set up the camera, positioned him just so in the dappling shade. He worked out his nerves in laughter and fidgeting. I pressed record. His smile into the glass eye of the camera didn't show his worries of the audience mocking him. He spoke with clarity and eloquence. Did the shoot really go so well on the first run? No redos, no bloopers? Awesome.

We run inside to download the clip and make sure everything went as smoothly as we thought. Turning the computer volume all the way up, we await his voice. His mouth was moving, but we heard nothing. What is going on? This was the first time using the mounted microphone so I check everything over, making sure everything was plugged in correctly. It was. But, wait? Oh no. It can't be. I never turned the microphone on. No, no, no. I could only laugh at my stupidity. He, on the other hand, dreaded starting over. It was perfect and he was sure it would never come off the same again. 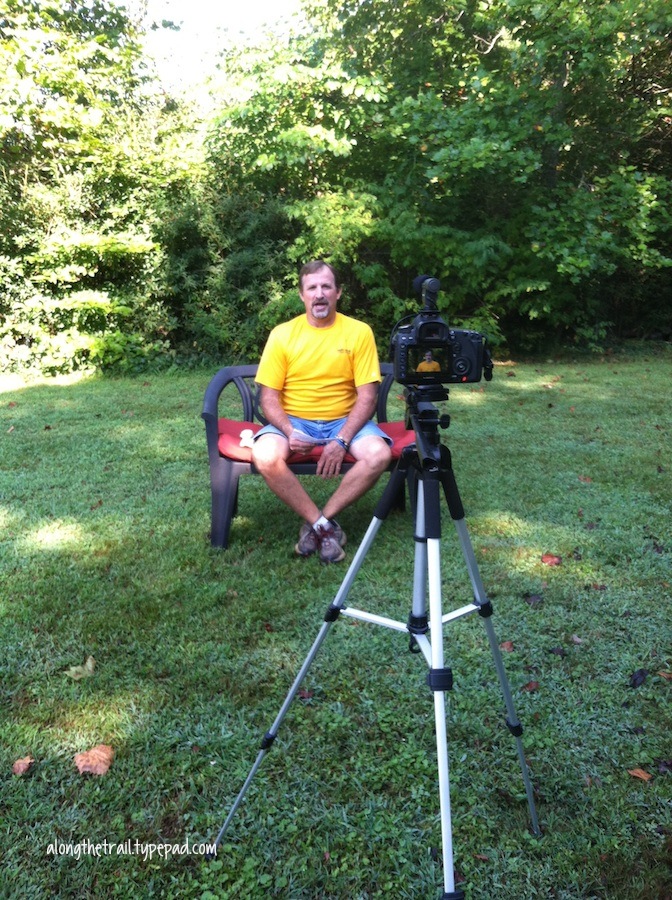 He was right. His words tumbled over each other, he misspoke, his thoughts were disconnected. Nothing like the first time. Deciding to take a break, he replaced a broken light fixture in my kitchen. In hind site, probably not the best idea, but Mr. Productivity can't sit still. Having to contort his already achy body in uncomfortable ways to reach the ceiling, he fought to make modern things work in old places. So much for a break. 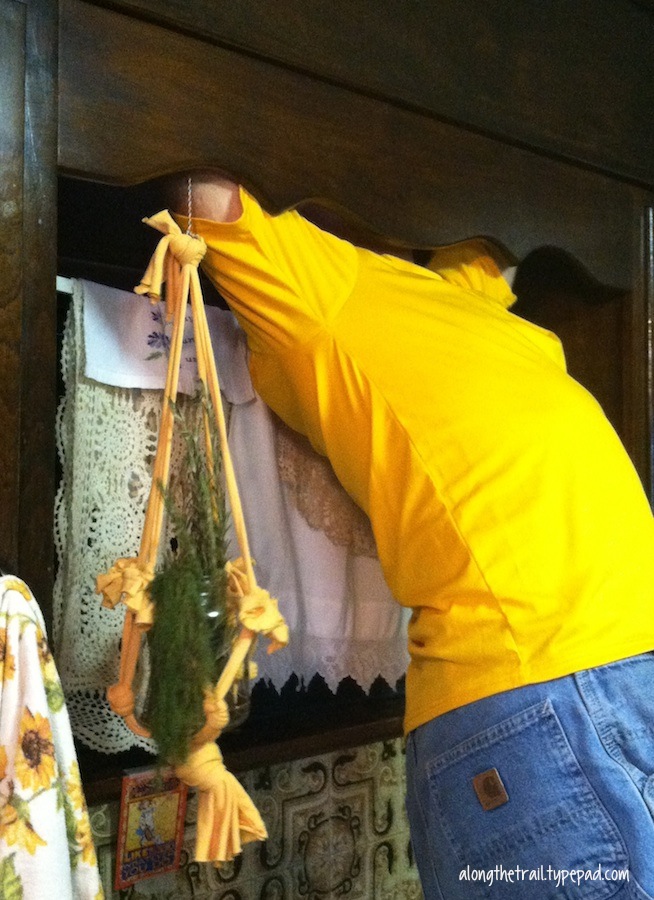 The time came to try again. All went surprisingly well. We go to watch it, thankful to have gotten the video just right. Mouth is moving, no sound. NOOOOOOO. I did it again. I forgot to switch the mic on. UN.BE.LIEV.ABLE. How could I be so dumb twice.in.a.row? He's disgusted with the whole thing at this point, and though trying to make light of it, is disheartened and completely over it! Enough for today!

As I sit here now in the quiet, I wish so badly I could push the undo button on this day as easily as I push it on my computer every day. But I can't. No amount of wanting will offer me such a luxury. So what am I to do? What are we to do when mistakes or life happens?

I don't really have a sound answer other than to say, we gotta let it go rather than harp on it. We must take strides forward. We must receive grace. If we walk in Christ, His grace extends to us continually. Take it! 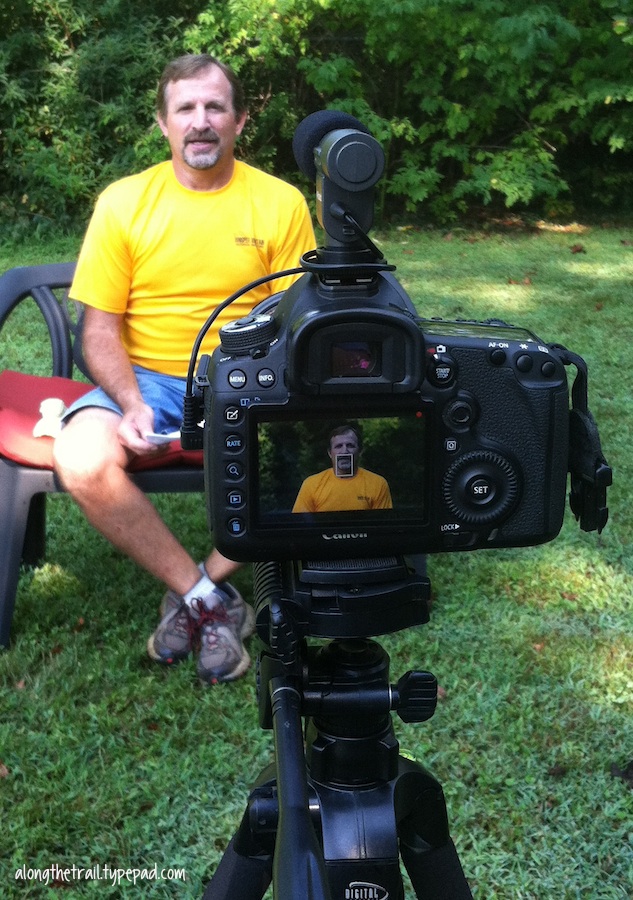 We made plans to try again tomorrow. But today, I am reminded of my great need for His grace. Thankful for such grace. And thankful I am Marty's daughter. He has to still love me, right?!! Who else will be kind enough to help build his character?

Go be smarter than me today!!

[Note: in case I accidentally made you believe the entire thing was misery, we did have quite a few laughs & chuckles through it all! I'm thankful for the encouragement given! It was nice to know I'm not alone in my mess ups!!]

We are wrapping up the 2013 Awesome Stage with Kyle! 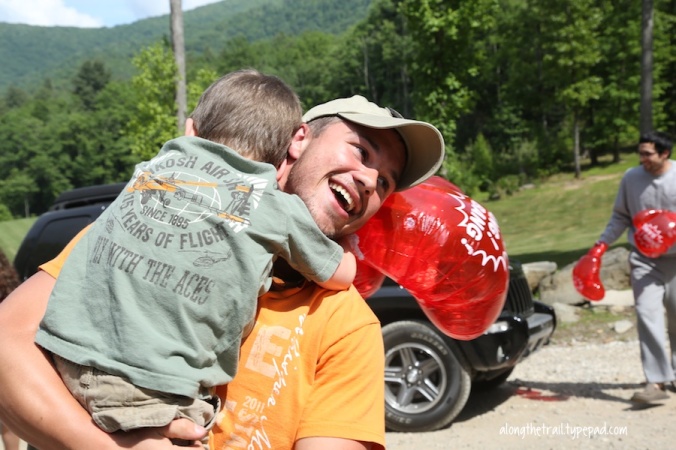 Kyle, the camper who found Jesus at a week of camp with us a few years back and has returned as staff since, left us a week before summer camp was over to start boot camp with the US Army. As much as we hated to say goodbye we are thrilled for him as he begins this next chapter of his life! 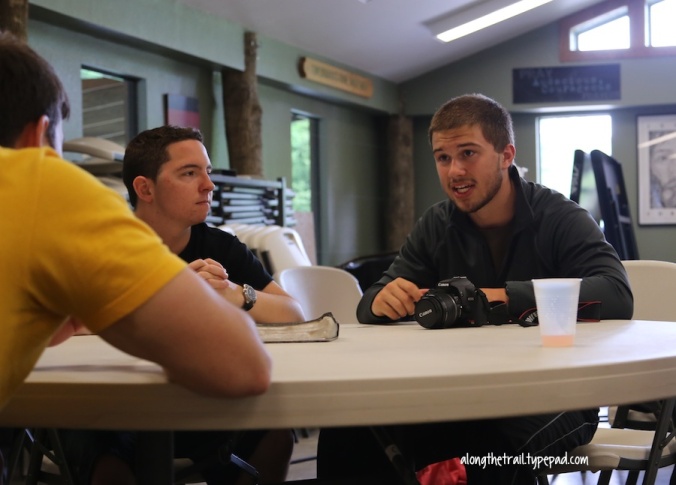 I can see how his years of growing as a leader and his strong love for the Lord will serve him well in this new world he's entering. 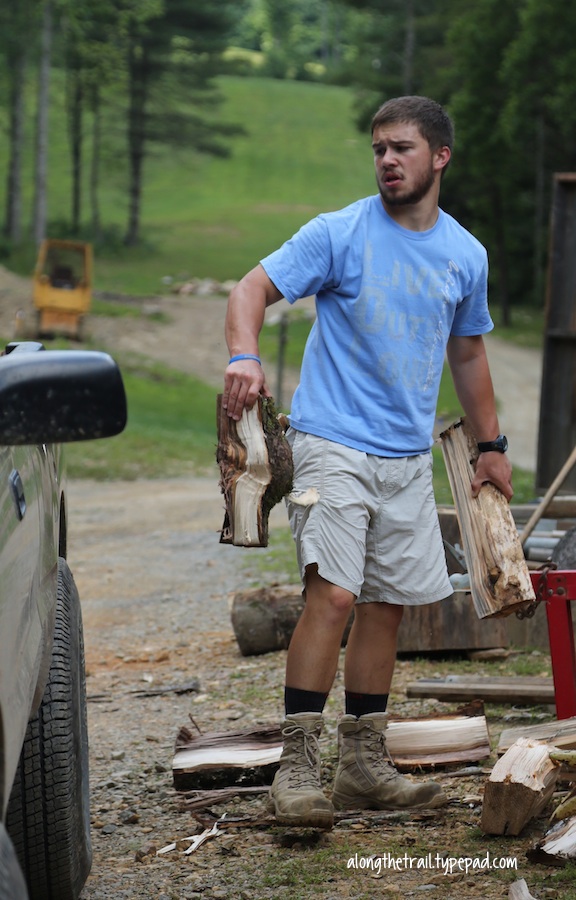 I really appreciate Kyle's work ethic. He is a guy who's willing to give it all until the job is done. 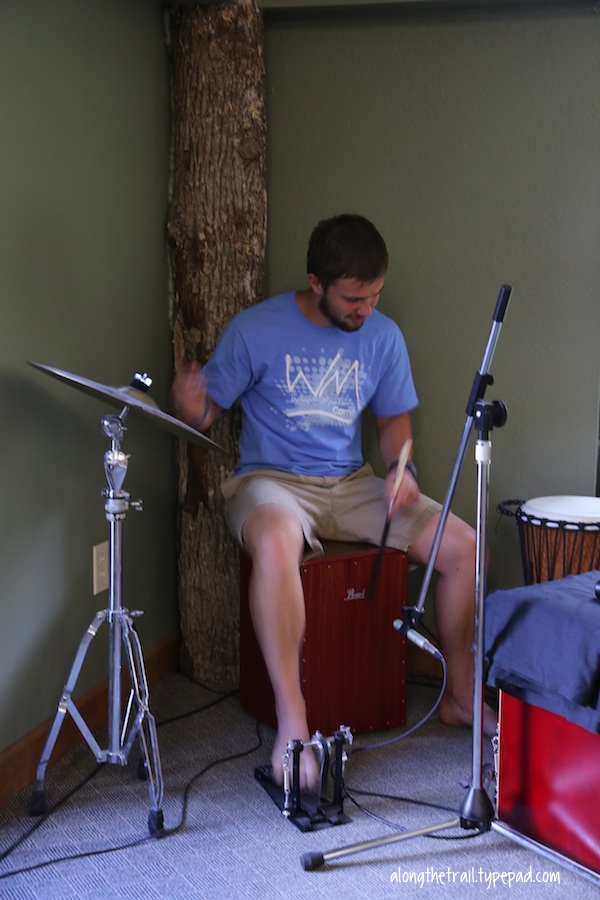 His gifts and talents were a blessing as he helped lead campers in worship throughout the summer. Watching Kyle give his life to be a blessing and encouragement to those around him helped to make our team a stronger unit and has uplifted me in many ways! I am blessed to call Kyle friend.

Before he left to go to boot camp, Kyle was kind enough to shoot a trail mix, encouraging us and sharing his heart for joining the Army. Check it out!

He's probably not able to keep up with it much now, but to see snippets of Kyle's life, check him out on instagram @iam2nd.

Blessings on your day!

Today with the awesomeness taking the stage you get a video encouragement (aka Trail Mix!)! Fabulous, right?! It's a good day! 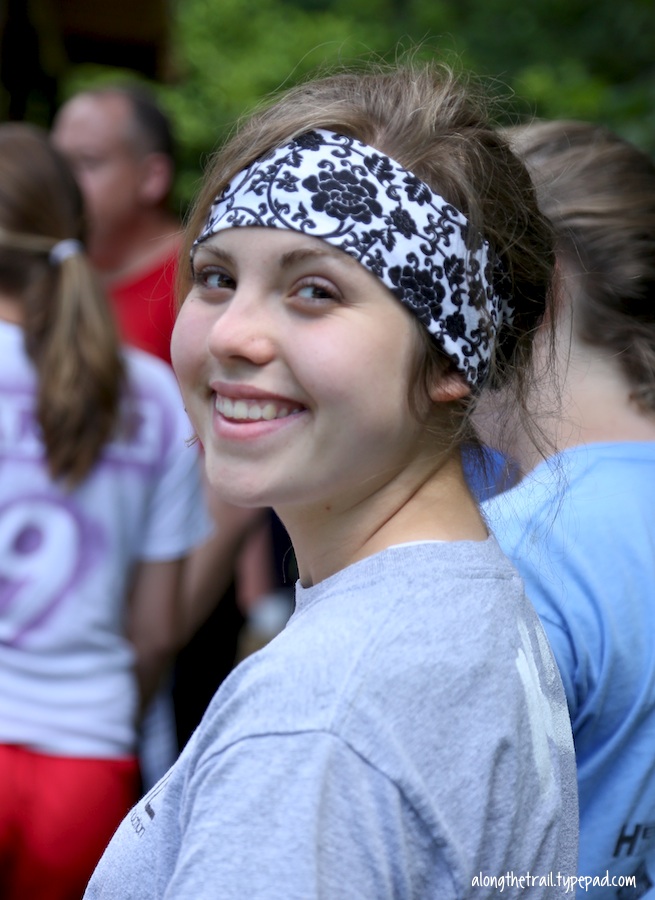 You may remember meeting Charley last year. She's one of our high school GITs (Guides In Training) serving with us at Whisper Mountain through the summer! 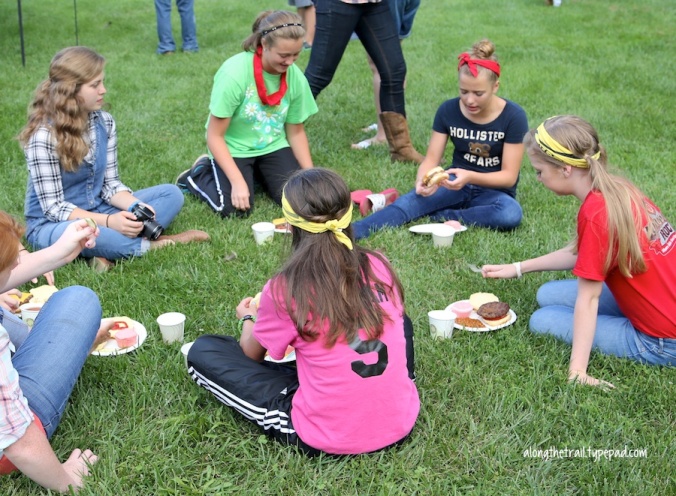 As she's grown more over the past year, I have seen Charley begin to spread her wings a little more in the areas of leading worship and intentional investment in campers. Her tendered heart toward God allows her to be effective in her areas of ministry! She shines her some Jesus!! 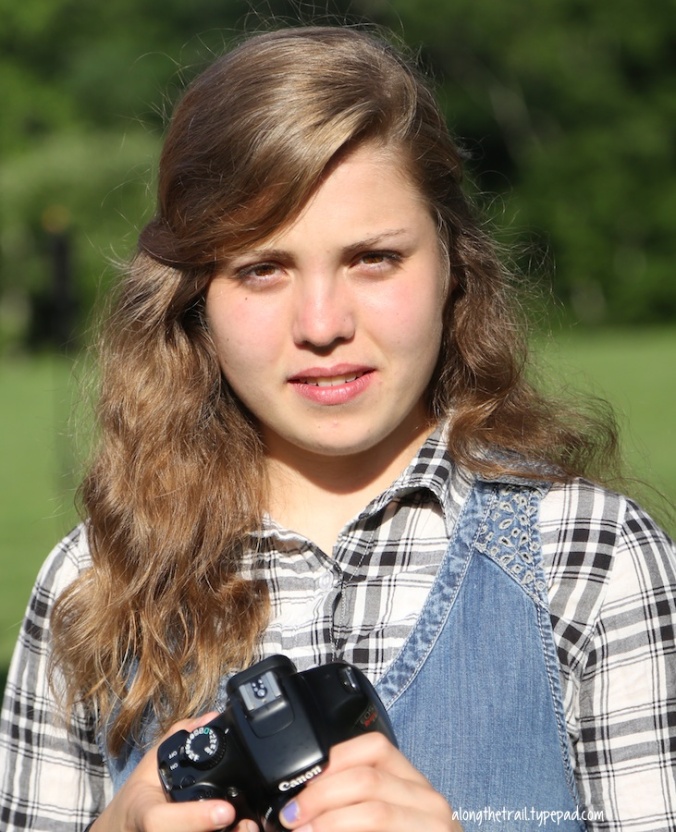 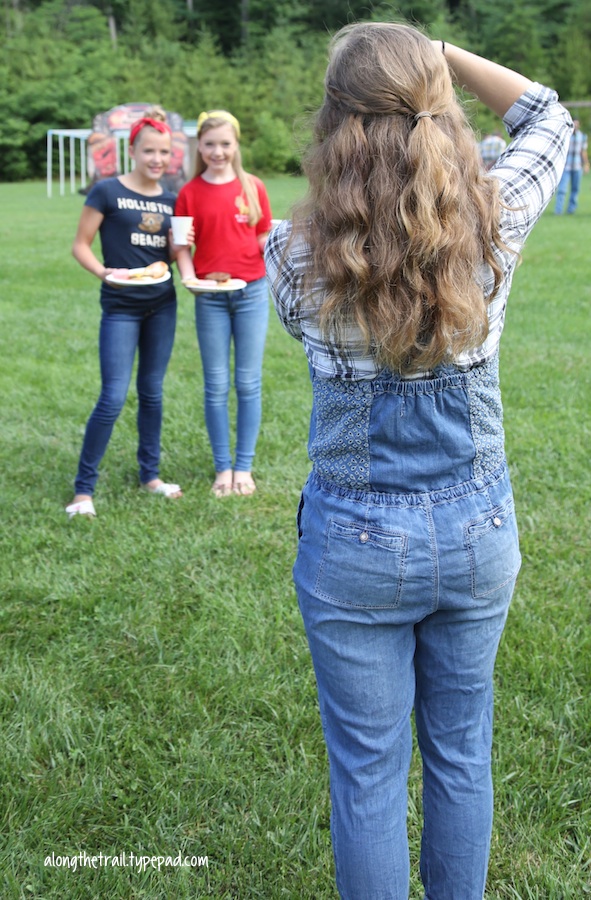 Having a flare of artsy in her, she can be found capturing her moments with her camera or giggling with Chelsea over their spur of the moment lyrics to random songs!

I had asked if any staff wanted to share an encouragement for our Trail Mix Episodes and Charley readily agreed! Take a listen and be encouraged in your own walk!

{if you are unable to view above video, click here}

Little Fun Fact: I'm late in sharing her video which means Charley has already experienced her NYC trip! Check out/Follow her instagram @givebeautyforashes to see a window into her trip!

We are thankful for Charley's service with us, her love for Jesus, and her heart for others to know Him too!

Has anyone let you know lately you're awesome too?! Have a great day!

{photo by Lauren Cardwell Photography}
Whether serving as Whisper Mountain summer staff or adventuring into marital bliss, Brian and Jaclyn have left their imprints of generosity, love, passion, fun and creativity on Whisper Mountain! (Nevermind their general awesomeness!) We get to peek into their newlyweddedness (it's a word today!) as they link up to their walks with Christ in our trail mix episode! Check it out!

{if unable to view the above video, click here}

Let's put on our love lenses and stand on the side of good!

{if unable to view the above video, click here}

Steady that wandering and feeble heart of yours (and mine!). The Faithful One is near!

Here on the blog we share behind the scenes conversations about daily life, walking with Jesus and the people and events of Whisper Mountain Camp!